We left Penrith and we were on our way to the big smoke, Sydney. We had booked in advance at the Lane Cove caravan park, situated within a national park, a bush setting but only 20 minutes via train from the city. We scored a stay 3 pay for 2 deal. It was a great place to base ourselves for the next 4 days. We could only check in at 12pm so we waited outside the caravan park and had some lunch instead of trying to drive around the city with caravan in tow. Once we checked in and set up we headed to the local shopping centre to do some Christmas shopping before heading home to Perth next month. 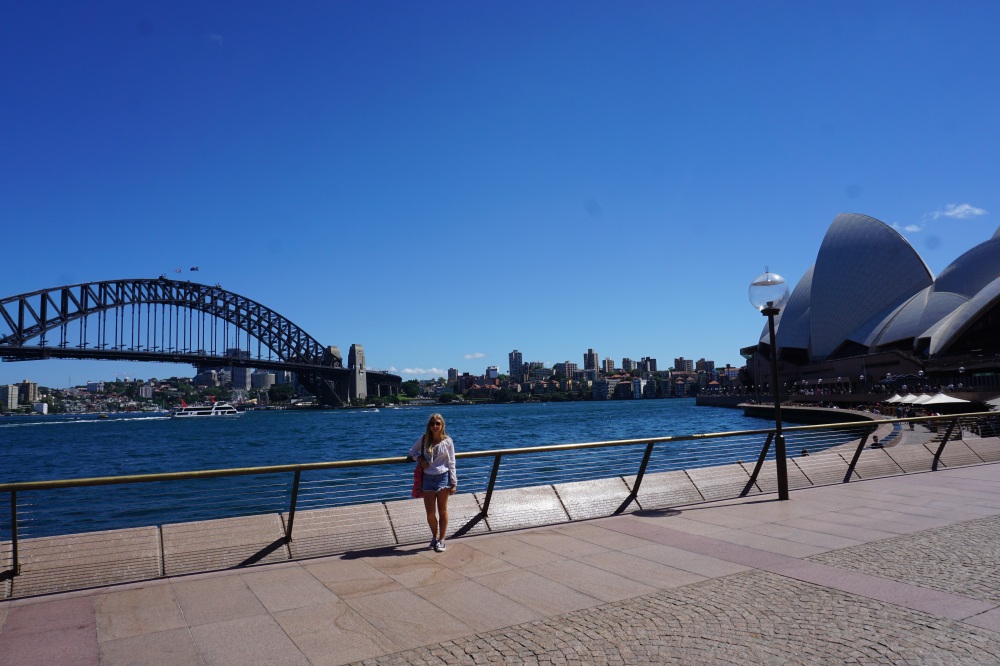 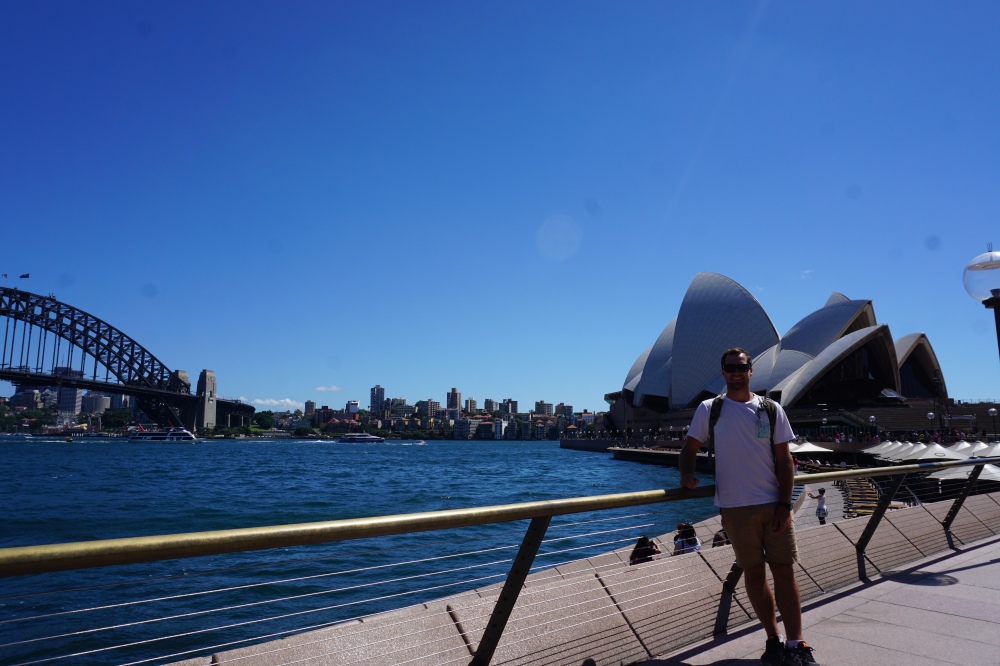 The next few days were filled with being tourists around Sydney. The first day we caught the train from Lane Cove to the city and walked to the Syndey Harbour Bridge and Opera House, where we got our token tourist shots. For lunch we walked over the bridge as we had been given a tip off about a great burger bar under the bridge. Satisfied with our lunch we set off on foot again exploring the city. Walking through Luna park, seeing the Olympic swimming pool and then to Darling Harbour for a drink to end the long, hot day before heading back to the caravan park on the train.

The second day we caught the train and then bus to the famous Bondi Beach. We couldn’t have picked a better day with pristine weather conditions. Leaving pretty early in the morning it was cool enough to do the Bondi to Bronte walk along the cliffs edge with stunning views over the coast the whole way. As the morning went on it was heating up and time for a dip in the sea. With the 1000’s of other people we found a space of sand to leave our belongings, and enjoyed our swim at Australia’s most famous beach. It was so busy compared to the secluded beaches we normally visit. Bondi was busy, but beautiful. 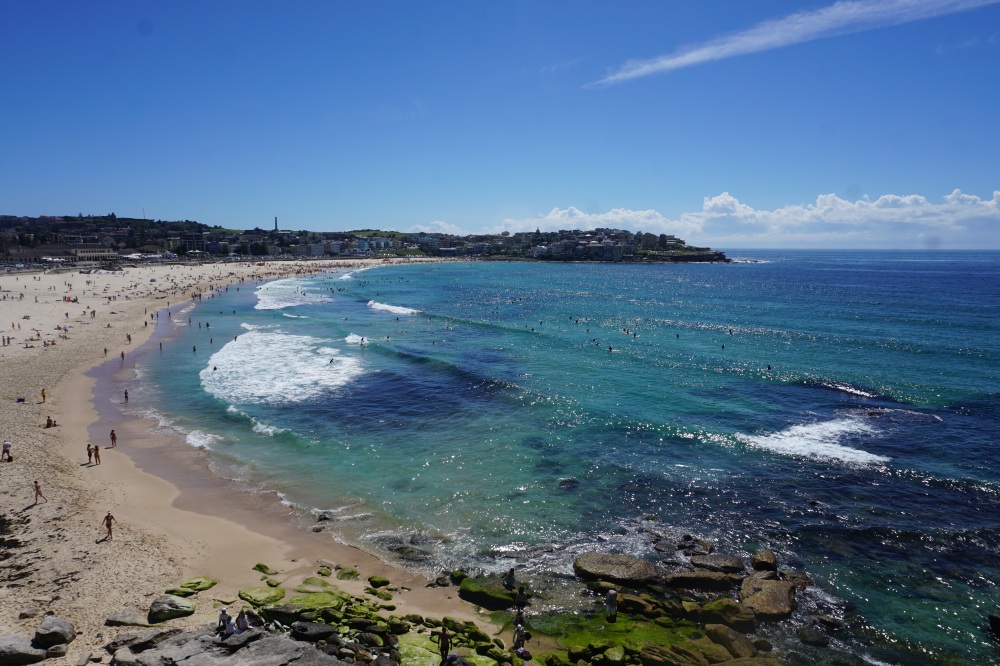 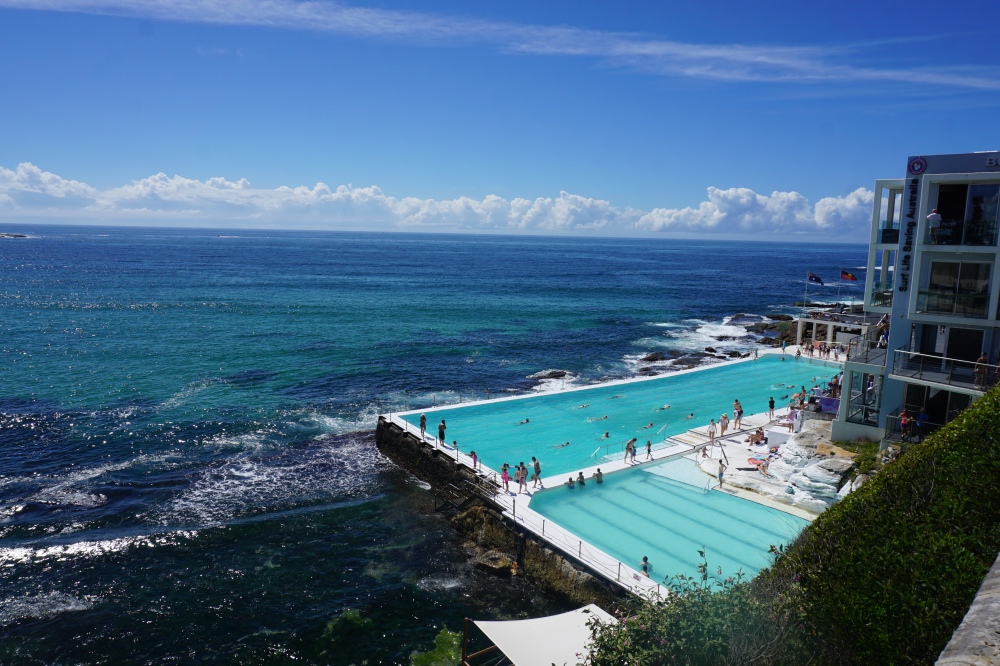 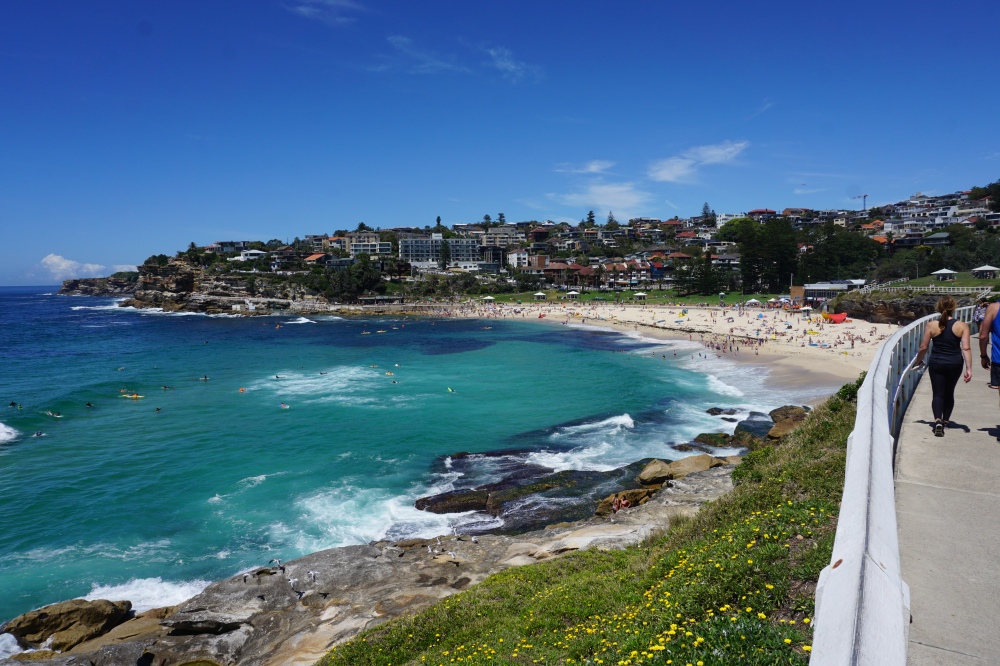 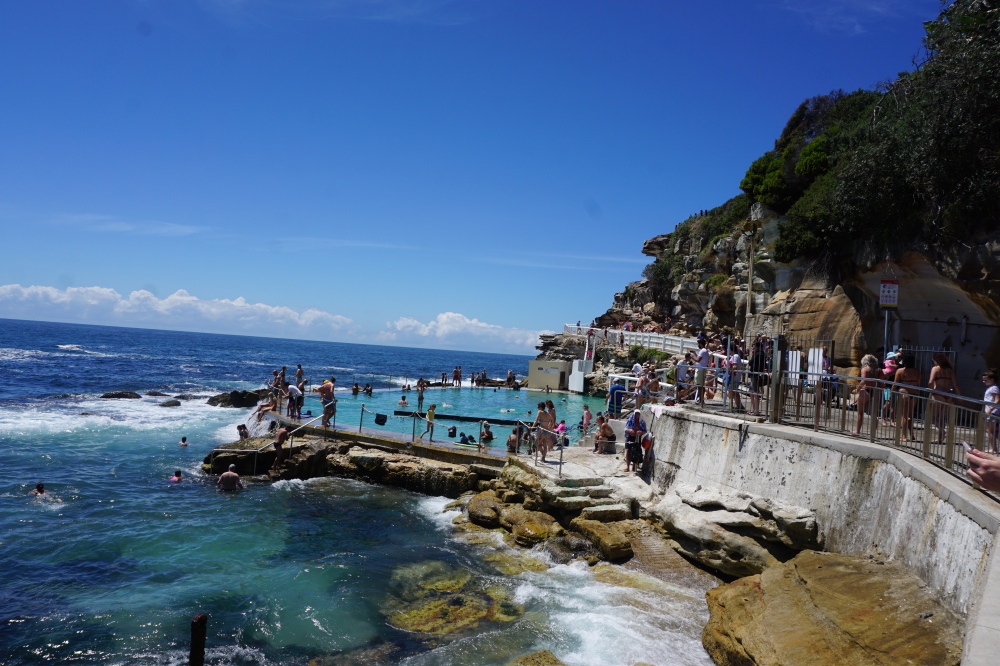 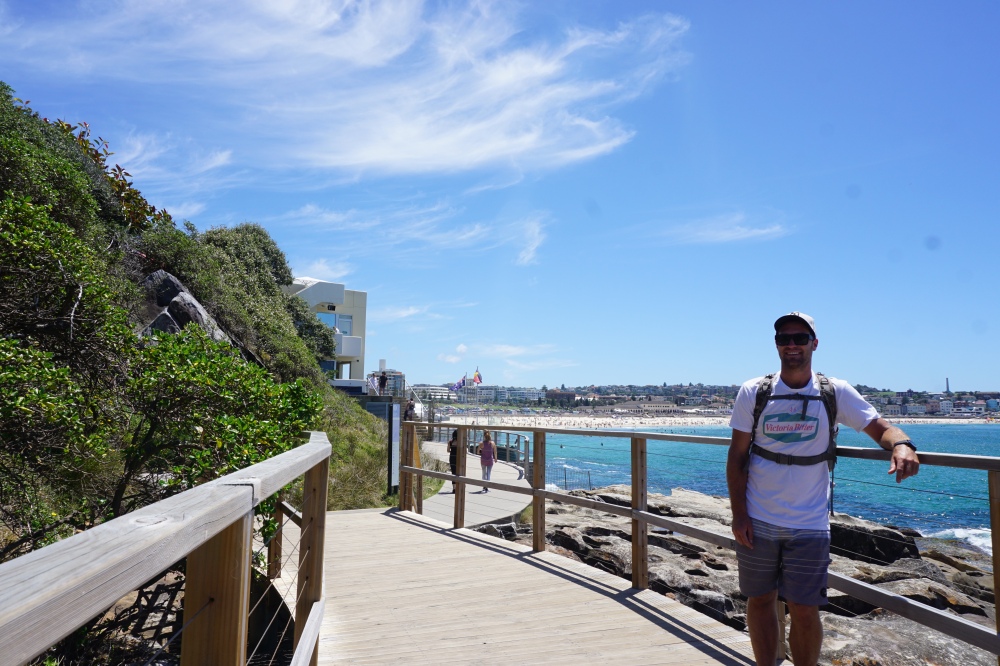 For lunch we went up to the RSL club and enjoyed a reasonable priced meal of fish and chips and parma and chips as we looked over Bondi beach. Being a Saturday the markets were on so after lunch we wandered through the Bondi market stalls where I purchased a beautiful mandala hand drawn map of Australia. After another busy day sight seeing it was time to catch the train back to lane cove and re-coop for our last day in the city.

Our last day in the city we caught the ferry from Sydney harbour to Manly. The weather was not so kind to us today being overcast and cooler. When we arrived after the bumpy ferry ride we wandered through the street of Manly. Stopping at a café for a morning coffee as we continued wandering through the shops and streets and down to the beach. We had lunch at Little Viet where we shared lemon grass beef and pork dumplings, it was delicious. Not long after lunch we heading back to the city to do a bit more Christmas shopping and visit Martin Place.

Our last morning at Lane Cove, started a little slower by going for a walk in the national park that the caravan park was within. It was filled with lizards, every couple of steps there was another one, and another one. Sunning themselves in the early morning sun and scratching through the bushes, they were everywhere! A peaceful morning walk turned into a very fast passed walk back to the caravan park. It was crazy to see so many lizards in the one place, so close to the city.

It was time to get out of the city and head to somewhere a little less busy. The Hunter Valley, NSW wine region. We based ourselves at the Cessnock showgrounds for two nights while we explored the area. With many cellar doors and places to wine and dine we spent the days visiting wineries, gardens and had lunch out at the Tuk Tuk Hunter Valley burger company. It was a nice few days, however when leaving we both agreed WA’s wine region is a lot more impressive. 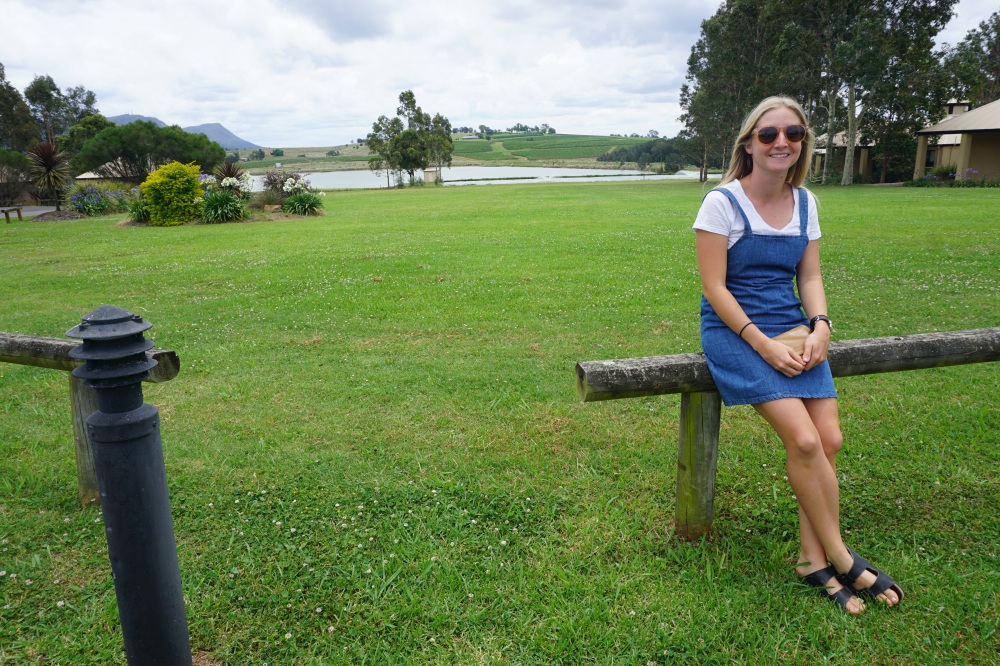 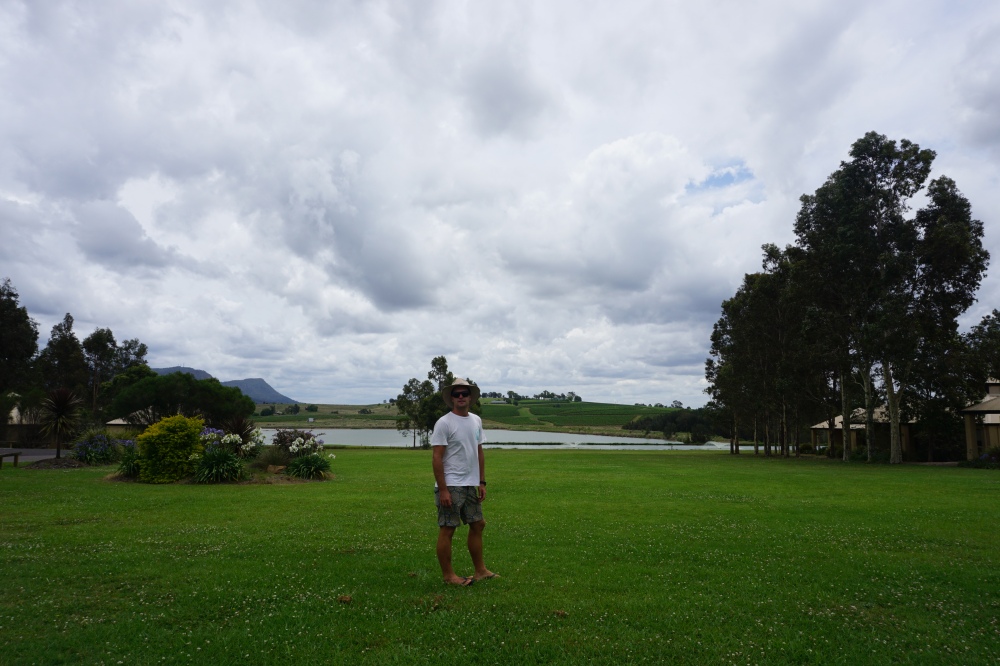 After a busy week of playing tourist in the big city of Sydney it was time for us to get back on the road and head up the NSW coast.. again. Thanks for reading, read next week to see what we do on our second time going up the NSW coast.