Once we left the Whitsundays, knowing we will return one day, we headed north past the big mango then onto Townsville. 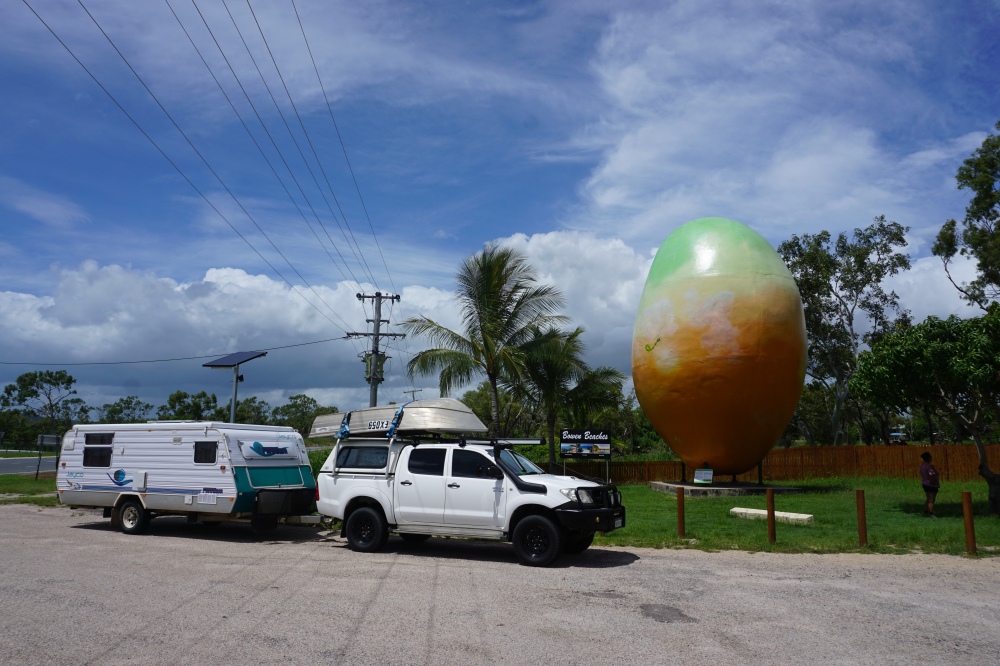 By now the nice weather had passed and we were back to windy, raining but stinking hot weather, also known as the wet season in the tropics. We spent longer than expected in Townsville due to the bad weather and floods north of us in Ingham. Since the weather was bad it was hard to get out and do things, but to kill some time we walked up Castle Rock several times in the rain and had panoramic views of the area. We also picked up some cheap tennis racquets at an op shop so we also played tennis most days and by night we enjoyed the night life of Townville.

The sun came out to play one morning so we decided to take the opportunity and make the most of a trip over to Magnetic Island. We caught the ferry over with the only ones on it with bikes, this should have been a sign. When getting of the ferry we realised it was a very hilly, steep island and we had chosen to ride our bikes for the day. It was a steep hike up the hills from the ferry to the other side of the island. We nearly turned around and hired a motorised scooter but then we realised we were half way already and had made it this far so we just kept going. It was all downhill to Horseshoe bay, which meant up hill on the way back but the picturesque surrounds were keeping us going. We arrived in Horseshoe bay, enjoyed a cold drink and some lunch and then locked our bikes up and checked out the surrounding beaches by foot. 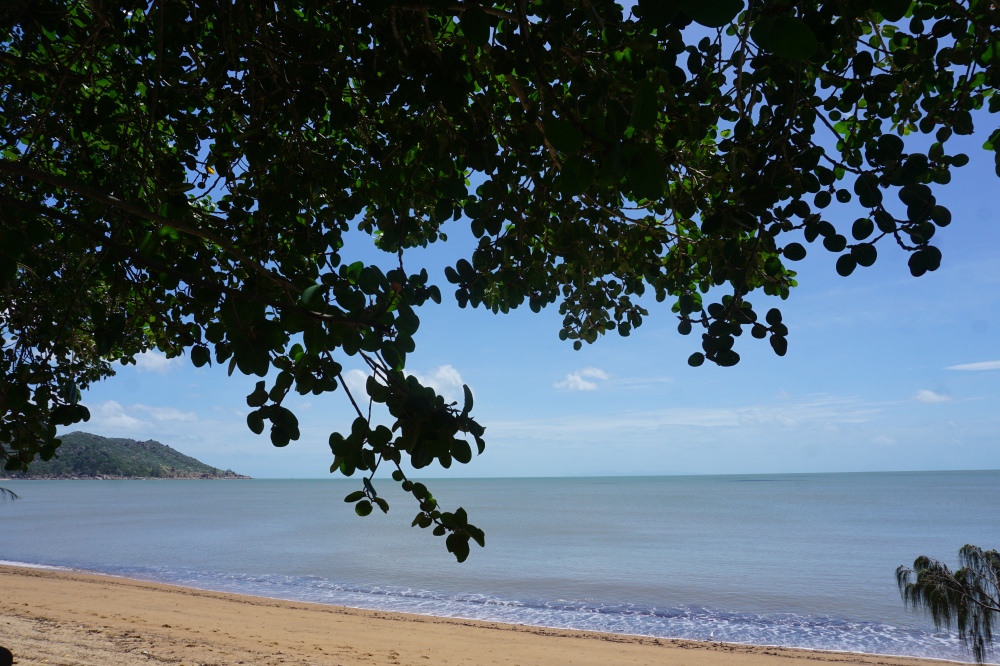 It was a rocky, sandy and slippery walk to Radical beach and Florence bay. It was well worth it when we had the beaches to ourselves as we enjoyed freshly cracked coconuts under the palm trees. After an exhausting yet relaxing day we got on the Ferry back to Townsville, just in time before the storm hit. 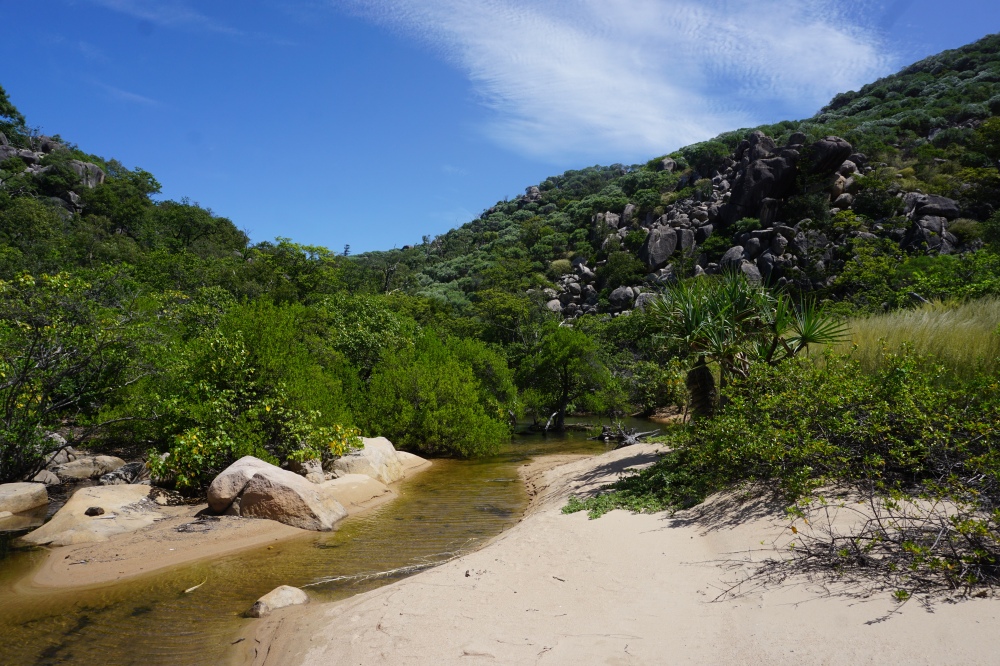 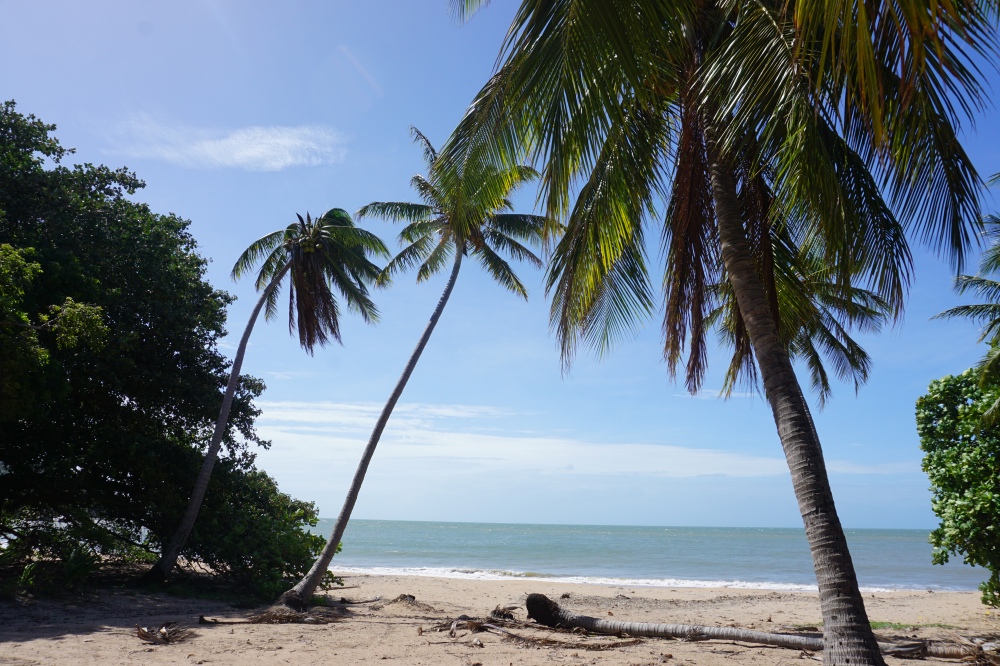 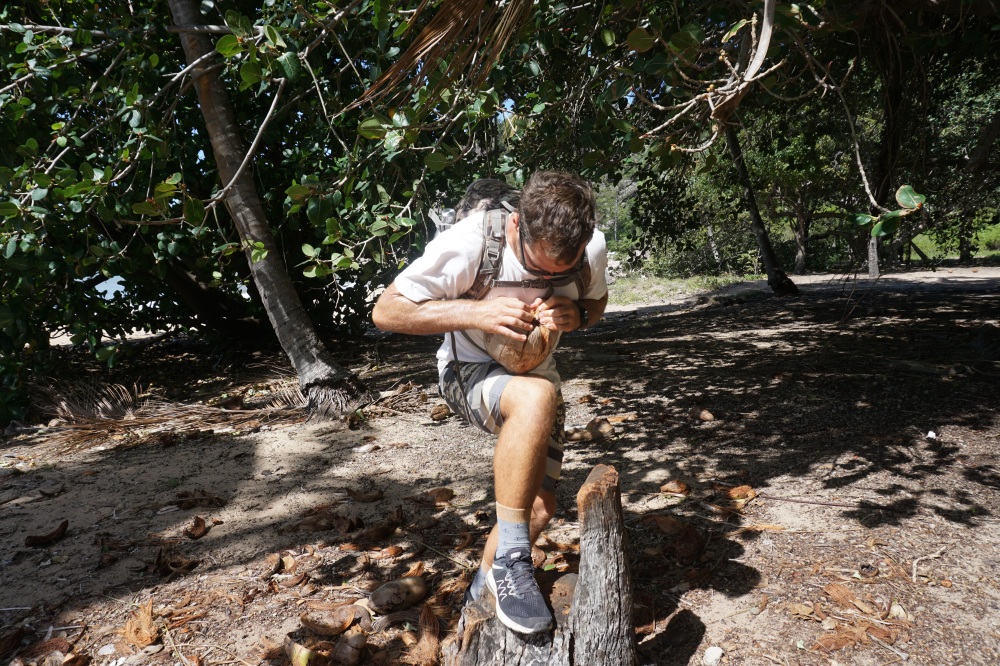 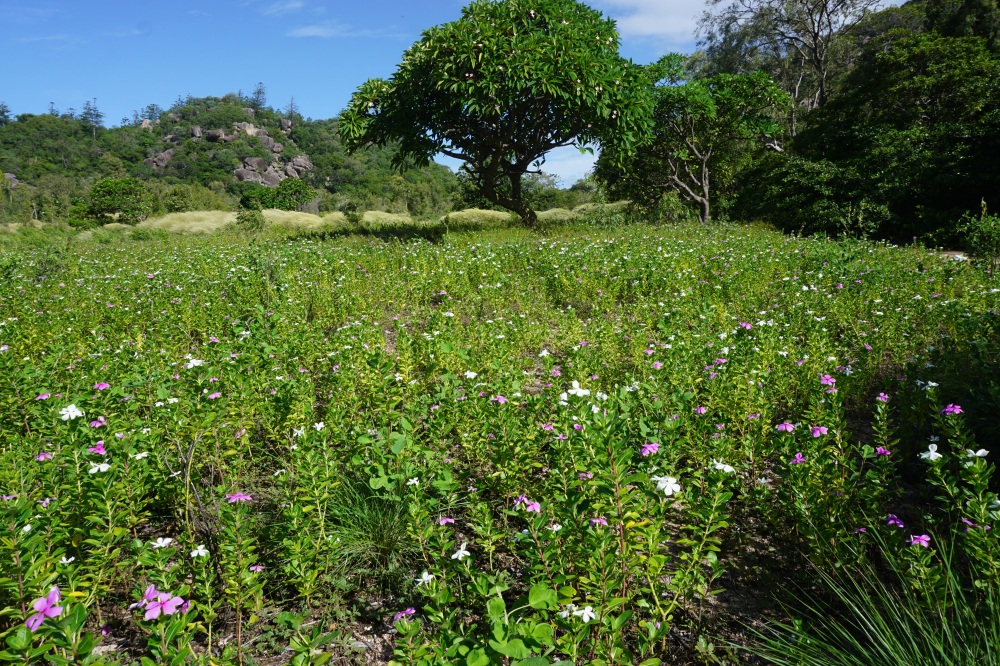 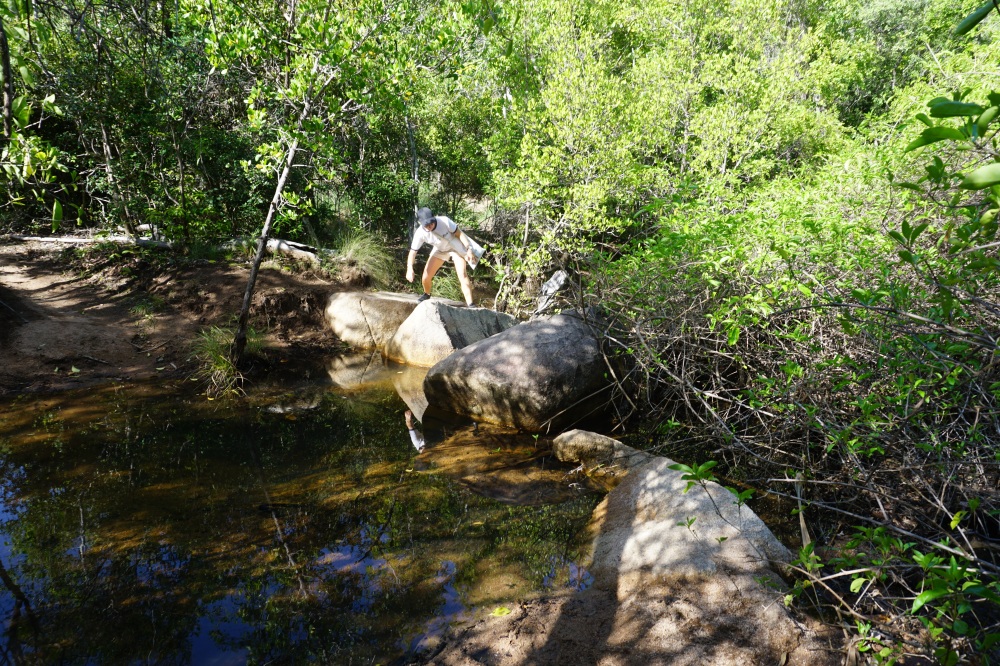 The next day we left Townsville, only to be stuck at Blue water for the next 3 days as the roads ahead where shut due to the floods. It wasn’t a bad spot to stuck for a while, it was free, had flushing toilets and a nice creek with really blue water.

Not far up the road from here was Little Crystal Creek and Big Crystal Creek we spent our days here cooling off and sliding down the natural water slides. 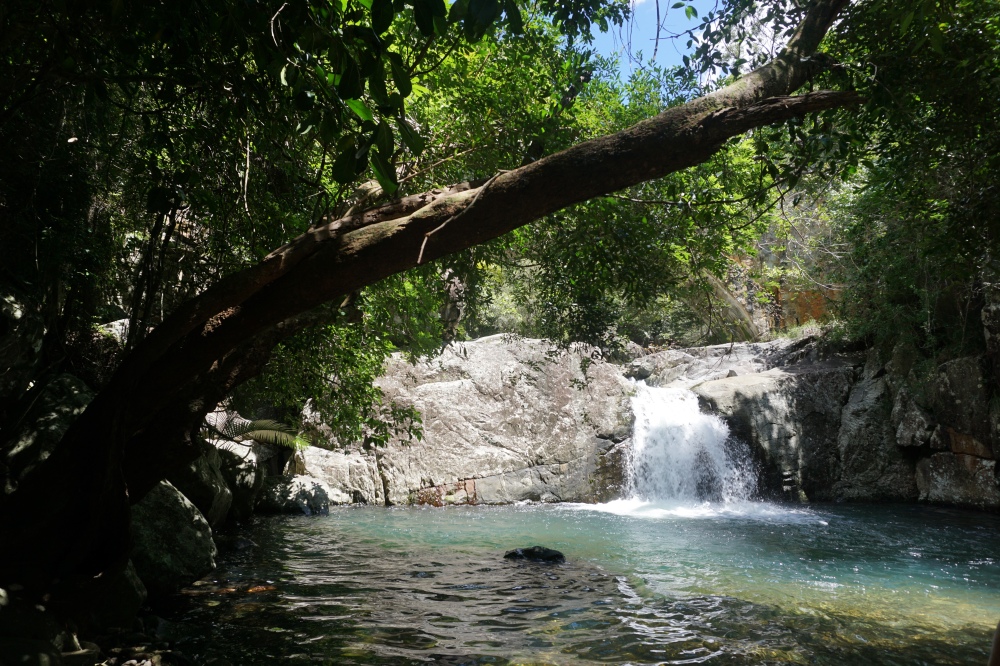 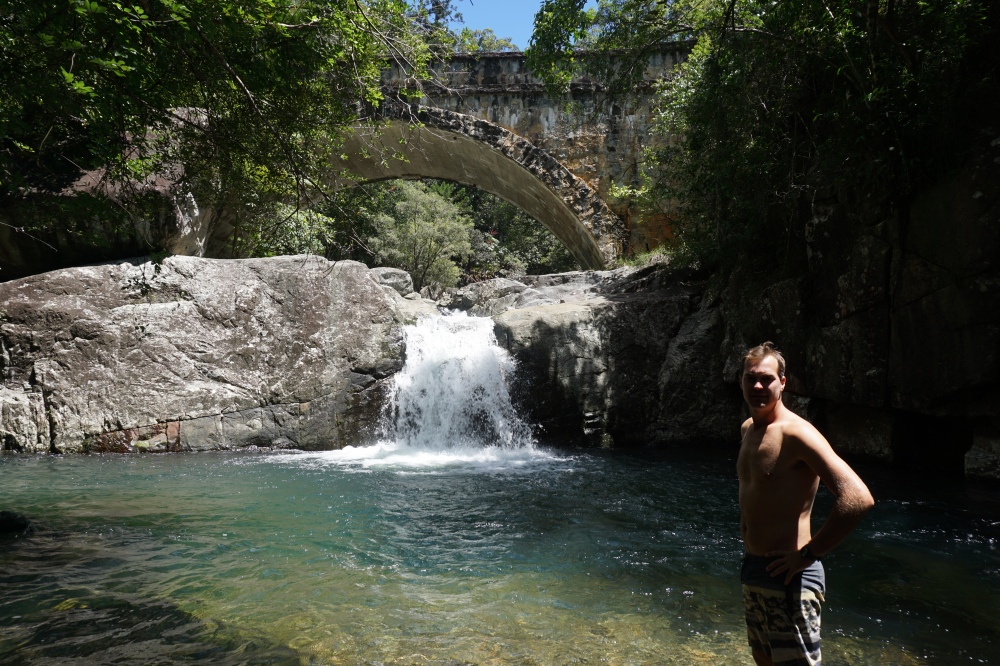 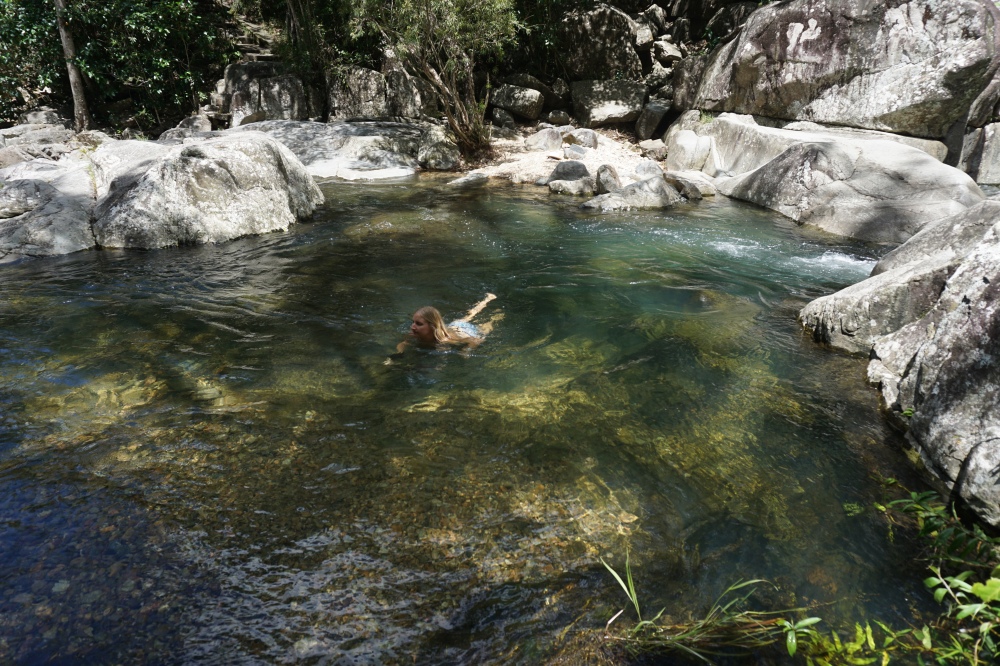 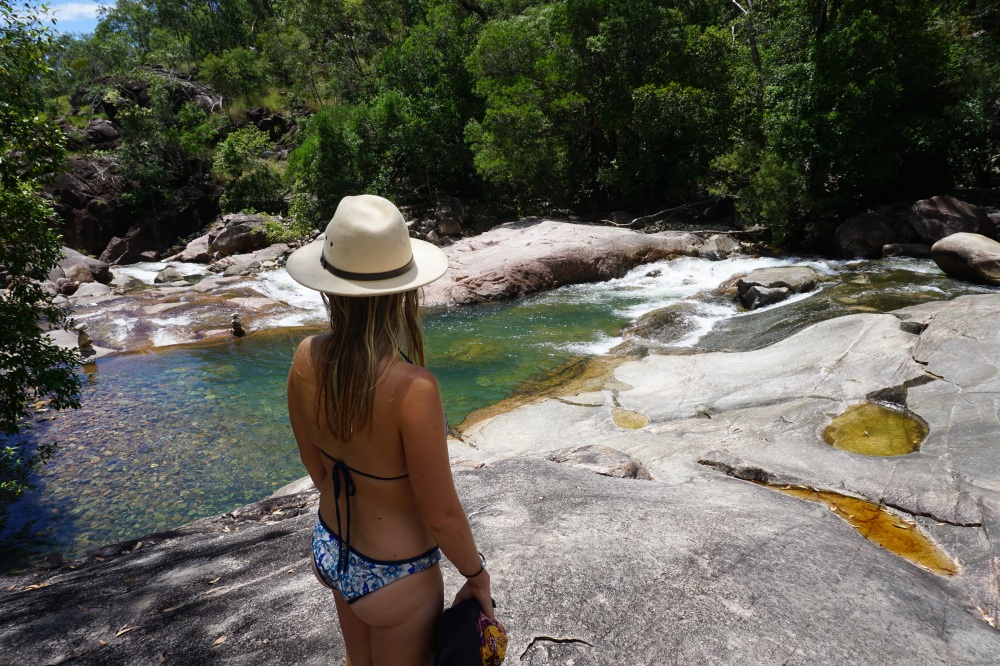 The road was re opened, so we continued to head north, first stop to see the pumping Wallaman Falls after all the rain it was in full flow.

We then stopped at a banana farm just out of Mission Beach and watched the process of picking and packing bananas then left with our hand full of bananas.

We arrived at the dreamy Mission beach. The weather played nice while we were here and we made the most of that laying under the palm trees at the beach and walking through the heritage listed rainforest that met The Great Barrier Reef. 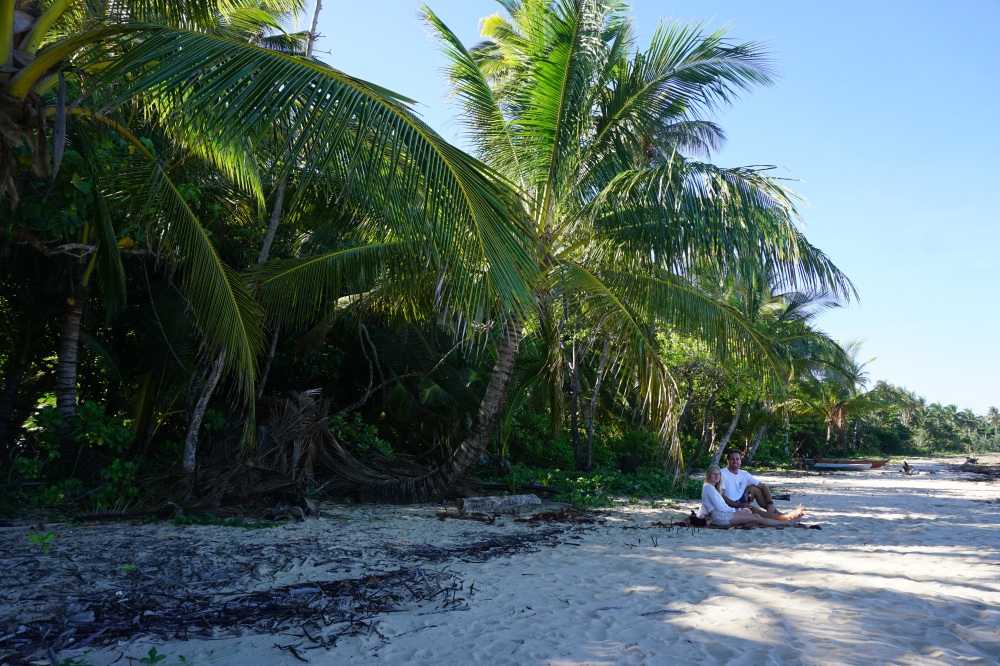 Also while we were in Mission Beach the Commonwealth games baton paraded through the streets as we watched on.

We left Mission beach and headed inland to Milla Milla, we parked up at the caravan park and spent the afternoon exploring the waterfall way. 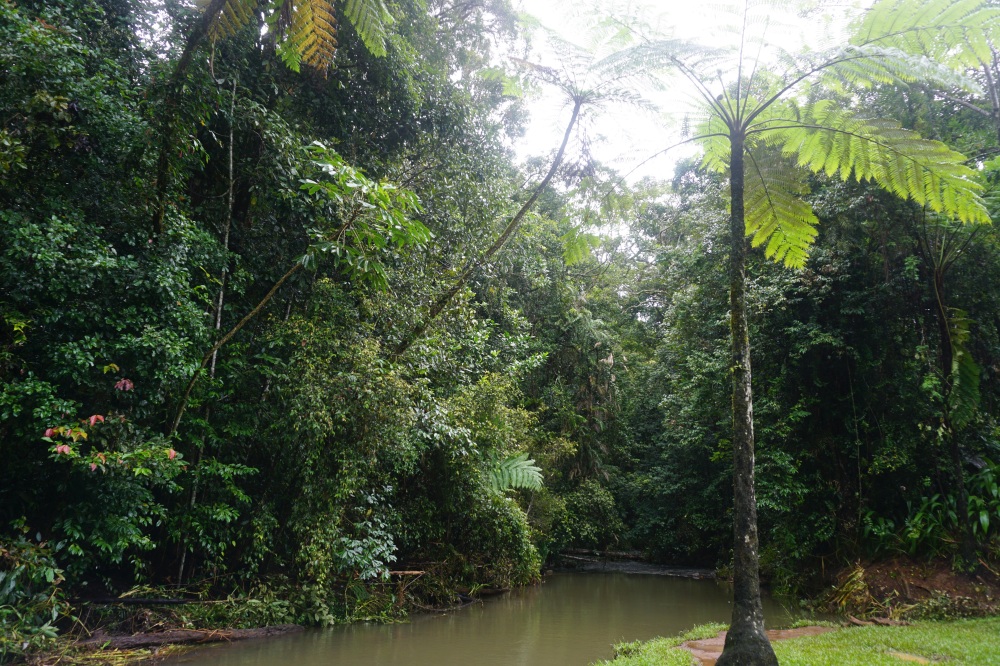 After just one night here we continued travelling, the next day we visited the Neranda tea farm where we enjoyed the tea as fresh as it gets with jam and cream scones. 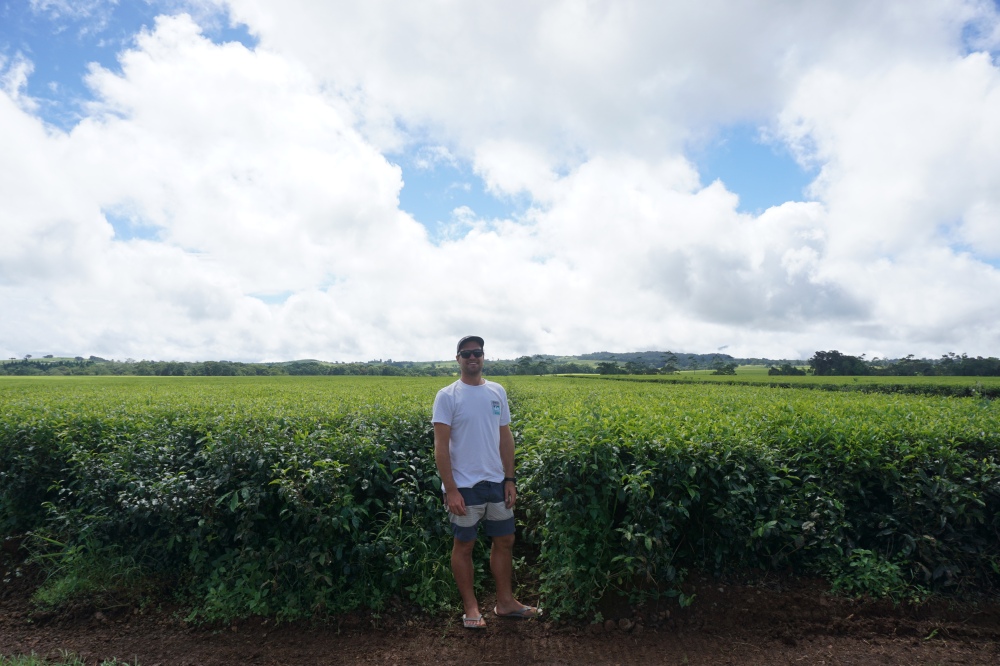 We continued to drive for the day through the Atherton Tablelands to Yungaburra, we stopped for lunch and visited the massive curtain fig tree then walked around the unique town. After we left here we drove to Lake Tinaroo where we set up for the night and flicked a line in. 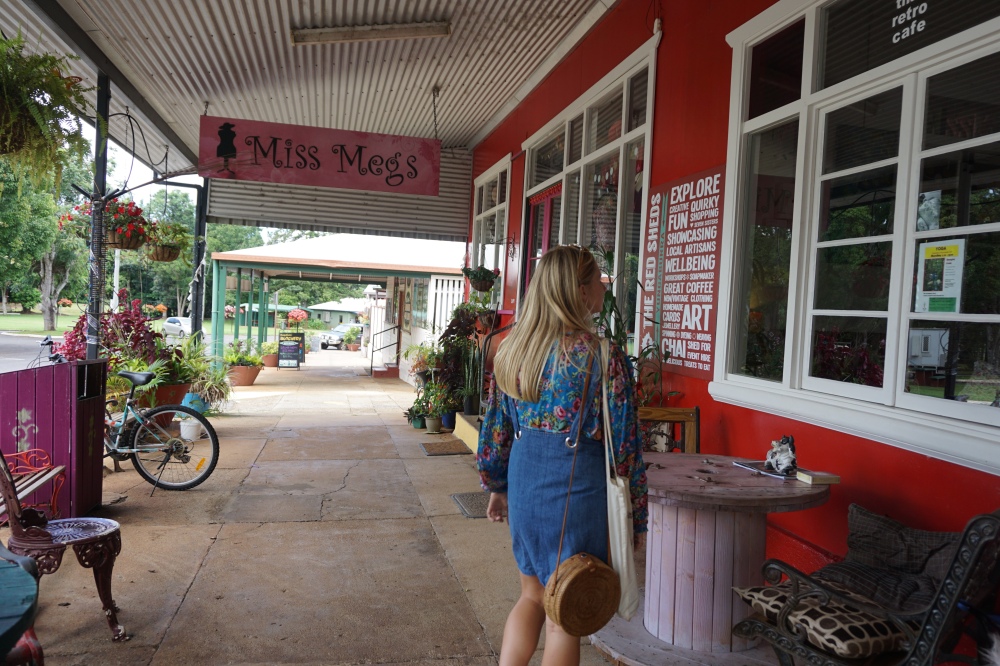 We were held up a bit the last couple of weeks due to the weather, but that’s just part of travelling in the wet season. Luckily we had a few days of sunshine to get out and explore.

Thanks for reading,read next week as we find an amazing piece of paradise.