Last week we left Cowell for Whyalla, where the outback meets the sea. Whyalla is an industrial town home to Arrium mining/ Onesteel Whyalla steelworks. Here we stayed at the local Weeroona Bay footy club for $10 a night, no power but it had a toilet and shower.

We explored the towns history visiting Iron Knob which is said to be the birthplace of the steel industry of Australia. We also visited the ship HMAS Whyalla. It was the first ship built at the Whyalla ship yard in 1941 during world war II. 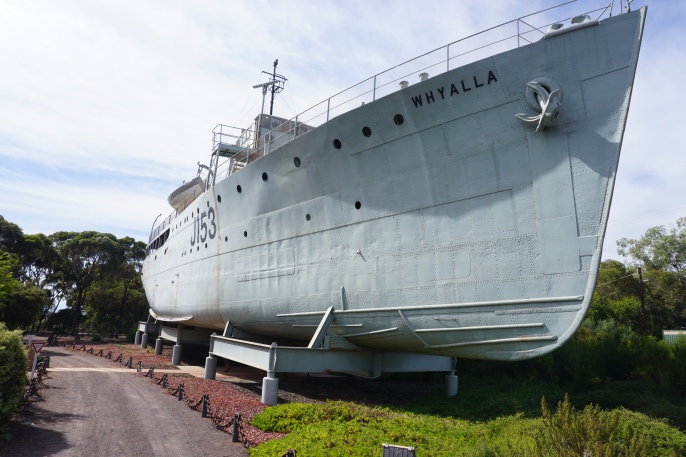 The time had come were we needed to decide if we were going to go across to Adelaide or head up the centre. The weeks forecast was becoming very hot, so we decided to move from the footy club up the road to Port Augusta and stay in a caravan park with a pool. When arriving here we looked at the forecast again. Hot temperatures of 42 degrees were forecast then the temperatures were dropping dramatically to a comfortable 26 degrees. We decided it was a good opportunity to head into the dessert.

We stayed in Port Augusta waiting for the hot weather to pass. We prepared by stocking up on food, prepping meals, washing clothes and servicing the car. We also spent our time here visiting the botanical gardens and went on many walks around the town, inlet and foreshore. Between all that we were escaping the heat at the caravan park pool. 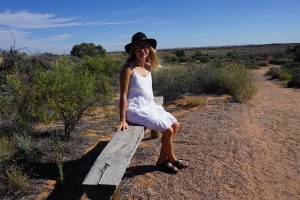 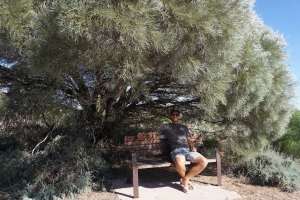 Early Monday morning we left Port Augusta and drove 530km north to Coober Pedy, known as the opal capital of the world. Being one of the most ethnic communities in South Australia with approximately 45 different nationalities as well as a large percentage of aboriginal people. Opals were first discovered in Coober Pedy in 1914, by 14 year old Willie Hutchison. Mining for opals by pitch fork underground, they soon built small bedrooms and living facilities underground due to the harsh weather conditions above ground. Below ground temperatures always stays between 23-25 degrees. Coober Pedy was named in the 1920’s after the aboriginal words “Kupa/ Piti” meaning white man’s hole. Now half of the towns 3,500 population live under ground.

We visited the Umoona opal mine and museum where we learnt Coober Pedy is also one of Australia’s most important prehistoric fossil sites. The Umoonasaurus fossils found here by opal miner’s dates to 115 million years ago as being the last marine creatures to survive the ice age. When the great inland sea declined, it created the opal and the great Artesian Basin.

We then headed to the local kangaroo orphanage for feeding time at 5.30. Here kangaroos are brought from vast area around. Joey’s come here when their mothers have been killed and they have been found alive still in the pouch. This can occur if the mother has been hit by a vehicle or also some aboriginals will hunt the mother kangaroo for some traditional tucker and an elder will bring the joey to the orphanage.

It was a very interesting experience here in Coober Pedy it’s like another world underground.  If you are ever heading up the centre, it’s well worth a stop here.

To use up all the crab’s meat we got in Cowell I mixed a few things together and came up with this yum crab cake recipe below:

Salt and pepper to taste

2 table spoons of oil (for frying)

Combine all the above ingredients together in a bowl and then shape into patty size. Chill in fridge for about 10 minutes. Heat oil in fry pan to medium heat then lightly brown on both sides. Enjoy!