After a month in Melbourne we were both ready to escape the city and get back out into the small country towns, which we both like the best. Leaving Melbourne, we decided to head down toward the coast to the Mornington Peninsula and Phillip Island which we were highly recommended to visit by Michaels Grandparents, he’s Grandad being a GP motorbike fanatic. As we started to become close to our destination I looked on Wiki Camps for a place to stay for the night. I searched around the Mornington Peninsula and Phillip Island area, trying to find something reasonable priced below $40 a night which ended up being near to impossible in this popular tourist area, even though it was “off peak season”. Refusing to pay the inflated prices we drove a little further which led us to the tiny town of Dalyston, where our adventure had just started. A beautiful beautiful town situation in the Gippsland area with views of rolling hills and diary cows.

We stayed at the Dalyston football and netball club for $5 a night with flushing toilets and grassy sites, the best deal going within the vicinity of the Mornington Peninsula / Phillip Island Region. The town didn’t have much besides a general store, which was also the fish and chip shop and the post office in one, they did also have a tavern. Arriving late in the afternoon it was soon dark as we spent our second night in our new caravan. It was a great place to park up while we spent the next day driving to Phillip Island for a day trip, only about a 20 minute drive from Dalyston. We had a full day of exploring Phillip Island visiting the main town Cowes along with the Phillip Island GP motorbike track and the Penguin Parade. 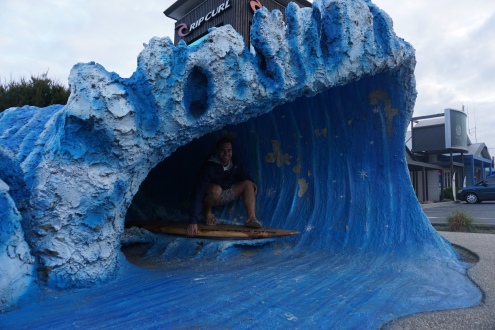 Deciding not to stay for the pricey penguin tour which commences at dusk we made our way back to Dalyston. It was a Thursday night and footy training was on, feeling slack after not doing a lot of exercise during our time in Melbourne, I forced myself and Michael to not sit down and relax. Michael ended up doing some laps of the oval as I was back at the caravan doing some Pilates and skipping. Michael came back not long after leaving to tell me that he was going to go train with the footy team, as he was running around the oval one of the coaches approached him, asked him if he played footy and asked if he wanted to train. Of course, he wasn’t going to say no, as he got his footy boots out for the first time since Kalgoorlie. He was pumped after training to be listed for the weekend game against the Kilcunda Bass Panthers.

The Friday we spent driving to the Mornington Peninsula for the day which was only about an hour drive from Dalyston. We drove down one side of the peninsula on our way down to the bottom we visited, Frankston, Mornington, Rosebud as we followed the coastline to Sorrento and Portsea. We drove home the opposite to see the other side of the peninsula.

The next morning was Saturday, which meant it was game day. We drove about 15 minutes to the oppositions team home ground and we parked around the football oval as does everyone else. Michael went to warm up as I sat in the comfort of the heated car out of the rain. The game was over as Dalyston won by a fair amount with Michael being one of the leading goal kickers kicking 3 goals. Impressed by the way he played the coach asked if we could stay around for next week’s home game, so we did.

After a lazy, recovery Sunday, Monday had soon come around so we set out for the day to Wilsons Promontory National park. One of our favourite national parks in Australia so far. We were amazed at the amount of wildlife we saw seeing 6 wombats (we have only seen one other in Tasmania) and too many to count Kangaroos and Emu’s. The Prom is home to the most southern point of the Australian main land, only accessible by foot, unfortunately we were underprepared and didn’t have the daylight hours for the 13hour hike. It was very expensive to stay overnight in the national park, however there is no day fee so we were happy to be heading back to our caravan back in Dalyston. 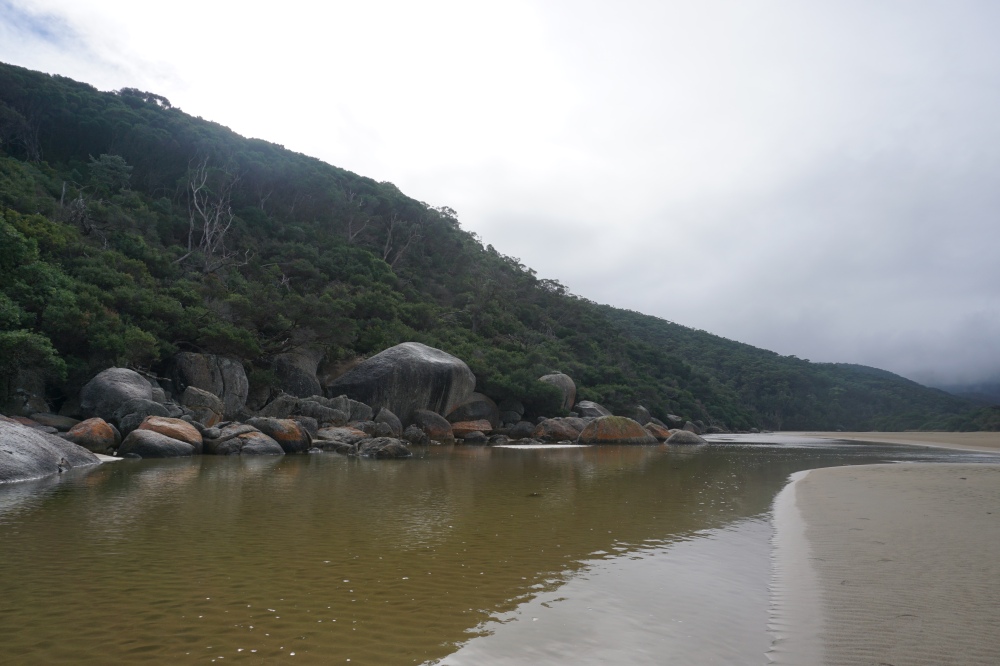 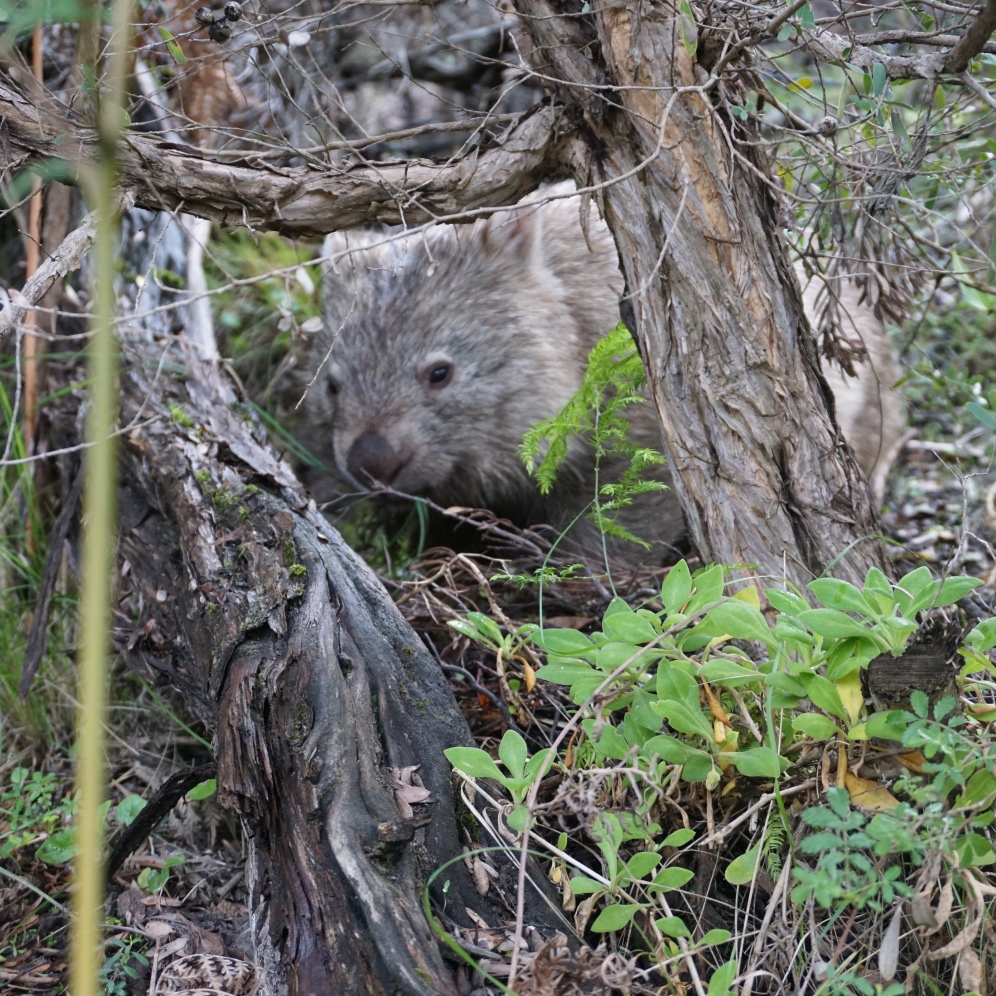 Early Tuesday morning Michael received a phone call from an unknown number who introduced himself as the guy at the footy club with grey hair. At the time, we didn’t know the close friendship we would form with Gus. He had called to see if Michael was interested in an hour’s work helping him put heat detectors on the back of cows and invited me along for the ride. We weren’t going to say no to payed work, even though neither of us had previously worked with animals. We were picked up from the footy club and drove about 40 minutes to a farm just out of Fish Creek. They boys soon got to work putting the heat detectors on, they are used to identify which cows are on heat. The way it works is the patch on the cow is blue when installed and when on heat another cow will jump on the back of the cow which changes the colour on the patch, so then the farmer can see the cow is on heat and ready for insemination. We loved our first experience working with animals as we headed home covered in cow poo.

It was a cold rainy week and we had done everything in the area we had really wanted to do so we spent most of the rest of the week reading books and trying to get our washing dry. Thursday had come around and we had something to look forward to. It was footy training again for Mick and I headed up to the club rooms, as we had been invited to their Thursday night dinner at the club, I went a bit earlier to see if they need a hand. My new friend Gus was up in the club rooms as he is a part of the footy club committee and does a lot of the cooking at the club. I helped serve up the curried sausages as the footy boys rolled in after training. When washing up after dinner Michael asked if we could join Gus at work again tomorrow as we had enjoyed the experience on Tuesday so much.

6:30am the next morning we were on our way to our first farm for the day where we went on his daily route to inseminate the cows on heat. We watched as he (not correct terms) put his arm inside the cow and put the bull’s sperm where its meant to go. We went around to many farms doing the same thing up until about midday we then went to a farm to where Gus had to test 250 cows to see if they were pregnant. This involved a long pole which is inserted in the cow and views like an ultrasound while wearing goggles to see if they cow is in calf or empty. Once Gus had called it, my job was to spray paint at the top of the tail green for pregnant or red for not pregnant, the cows then got dench on them to avoid worms and they also got a needle which I assisted with loading the syringe. Meanwhile Michael was mustering the cows into place. The same process went on for the next few hours as 250 cows went through. Exhausted by the end of the day, and again covered in cow poo, but we had so much fun. Gus was nice enough to invite us back to his house to have a shower and some left over curried sausages as we spent the night meeting the rest of his family.

Saturday had come around again and it was game day, this time at the home ground. We didn’t have far to travel this week for the clash between Dalyston vs Korumburra. It was another thrashing for Dalyston to win by 52 points.

We were lucky enough to be invited to the Dalyston football and netball club’s annual midyear ball held at the local Wonthaggi Club. We enjoyed a 3 course dinner, drinks and the company of the Dalyston club, our first night out in a long time.

Sunday morning was a pizza for breakfast kind of day and then later in the arvo we were invited to Gus’s house for a farewell dinner and drinks. He sent us off with his homemade goodies including salami, pickled onions and fig jam. We had so much fun the past 2 weeks and we experienced things you could never pay for, made life long memories and friends. Thanks again Dalyston football and Netball club and I am sure we wouldn’t have had this experience if we had of stayed at a nearby overpriced caravan parks.