We left the Gippsland dairy farm area and headed back up towards the Murray river. After a long day of driving from one of the most southern points of Victoria to the Victorian/ New South Wales border we arrived in Albury. Michael’s friend Matt lived close by and met us in Albury for dinner at the Brady’s pub and then showed us back to his house situated on a grain/ sheep farm where we were lucky enough to stay inside in a heated room.

The next morning, we woke after the warmest sleep we had had in a while and we soon went back into the closest major town Albury, where Michael showed me around as he had been in this area over Christmas doing the harvest season with his friend Matt. The weather wasn’t the best but we wandered around the town and visited the Hume Dam.

The next couple of days we spent visiting nearby towns Howlong and Corowa where we treated ourselves at the Chocolate and Whisky Factory. It was time for us to get on our way, moving on towards Canberra, we left Matts place (Thanks for having us) which meant we had to say goodbye to his seriously cute puppy “Booch” who made us miss our fur babies back home.

On our way we stopped at ” The Rock” where we climbed to the top. Then parked up at a free camp in the town of Wagga wagga just spending the one night at these great facilities situated right on the Murrumbidgee river. We went for a very slippery walk along the river banks in the morning before packing up to drive to Canberra.

We arrived around lunch time to the camp grounds, which we didn’t realise until arriving that they are the grounds that Summernats is held at annually. Michael, his brother, dad and friends had been 2 years ago.

This weekend there was no car show, instead a dog show which was very entertaining to watch from Jack Russell’s to Kelpies running through an obstacle course, which again made us miss our dogs back home. 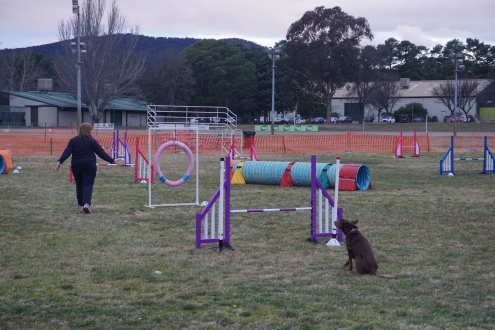 We spent the afternoon visiting the National Museum Australia where there was a school holiday special“History of the Bicycle” which was an interesting display of how times have changed from the first bicycle to now and the history of the cycle including the first person to ride around Australia. 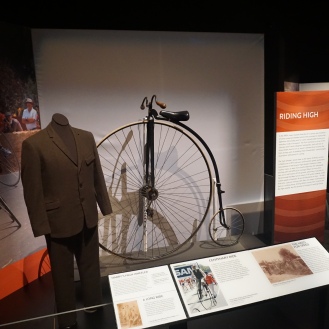 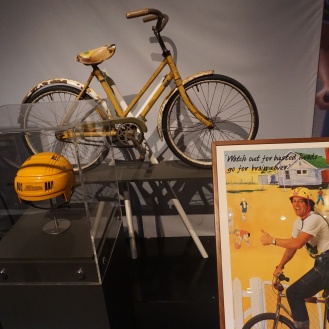 Next, we visited Parliament house, it always cool to see the places you see on TV. It wasn’t the most exciting thing we had ever done but we had to do the tourist stuff while in Canberra and it was interesting to see. 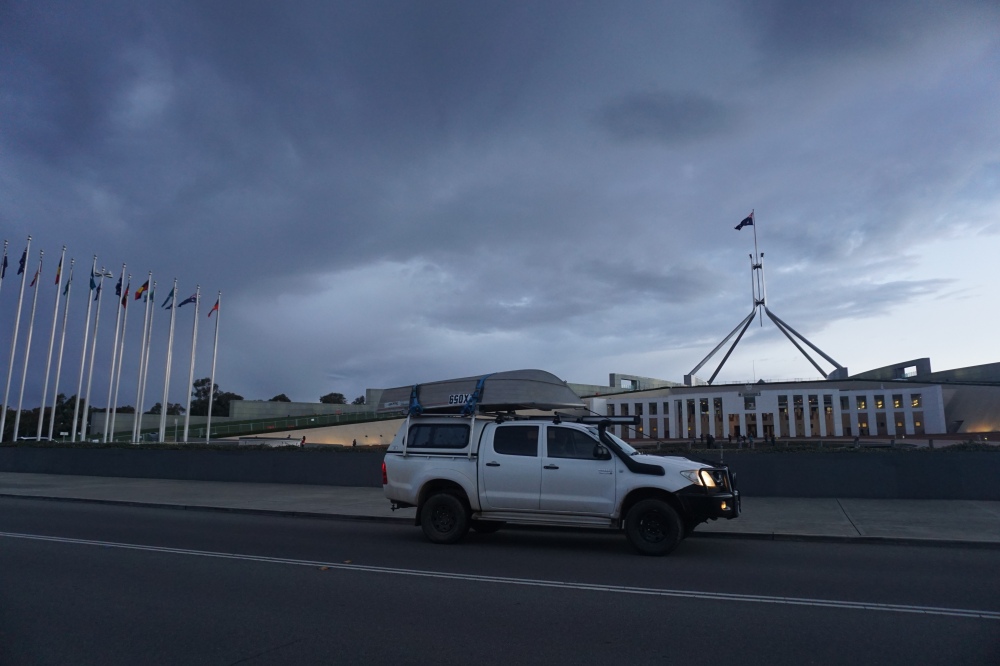 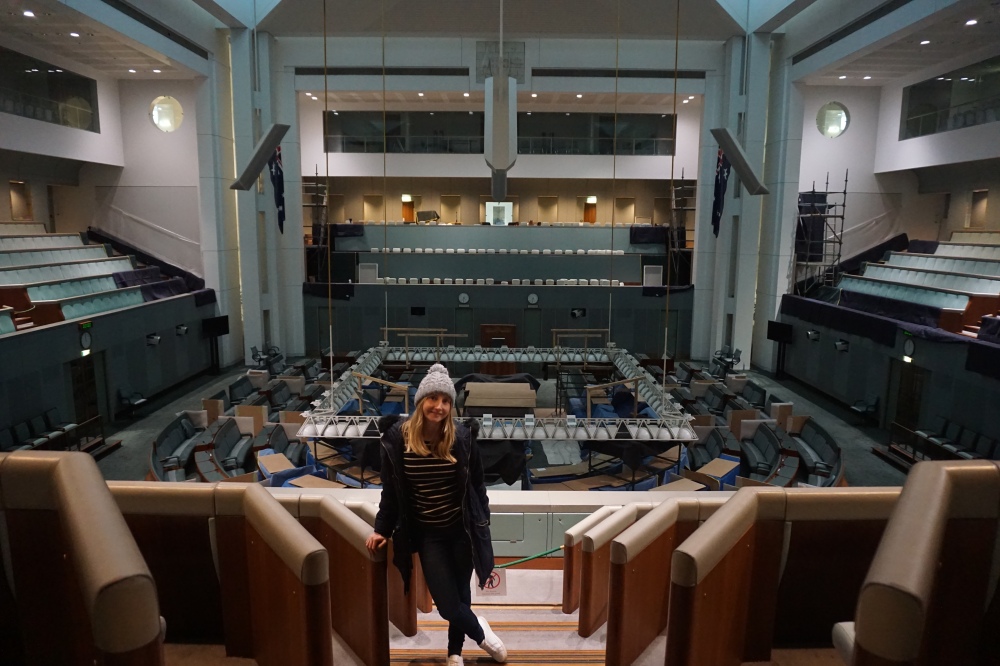 Did you know that the senate room at parliament house is the only place in Australia that can have pink EXIT signs?

Enough sightseeing for the day we went into the town centre to have a look at the Curry Festival being held but then decided to eat at The Mandalay Bus which was featured on the Food Safari TV show. Both of us enjoyed a satay chicken taco and coconut noodles with Burmese chicken.

The next morning was Saturday, my favourite time of the week, farmer’s markets and this week they were conveniently located at the show grounds. Just a short walk from our caravan we had several food vendors with fresh local produce. After stocking up on fresh fruit and veg we were ready for more sightseeing, today visiting the Australian War Memorial. 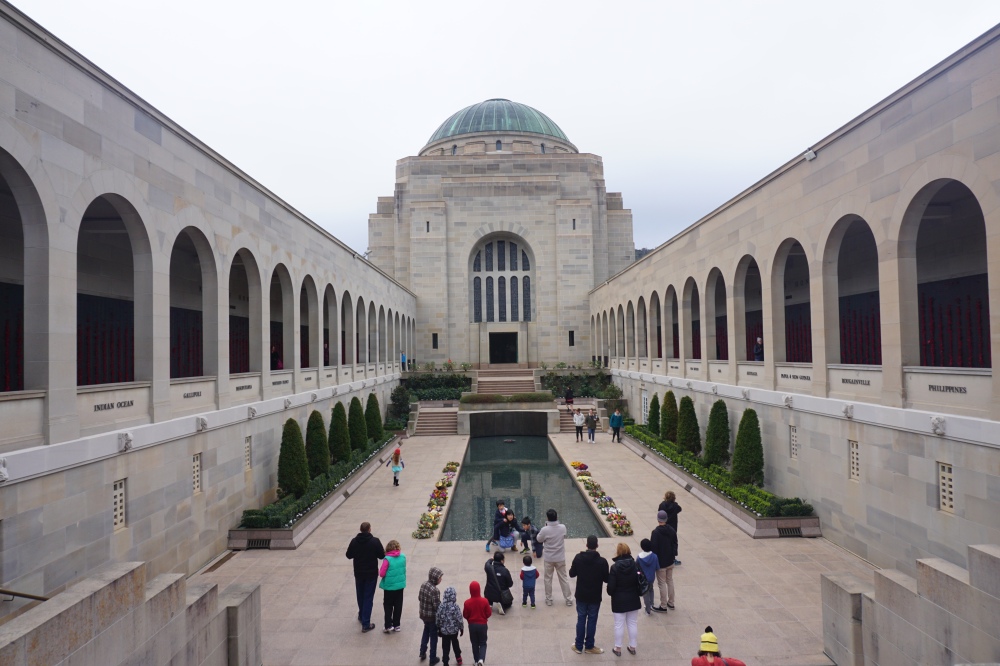 A spectacular display, we spent 3 hours here, reading all the history on war from World war I & II to the recent Afghanistan war from weapons to transport to uniforms and so much more. Leaving feeling overwhelmed with all the information which before was unknown. We are so lucky to call Australia home and we have so much gratitude to the brave men and women who fought for our country so we can live the free life we live today.

After a morning down history lane we went and to the well known Patissez for a famous #freakshake milkshake. Way too much sugar in one cup but so yummy.

Two nights was enough in freezing cold Canberra (we had -4 degrees overnight and maximums of 10 degrees during the day). Follow us next week as we head up the NSW East Coast to meet our friends in Byron Bay.